Here is a list of the Erica Synth DIY PCB and panels sets and the parts and components that we sell to build them.

In addition to the above we also sell IC sockets, Alpha potentiometers and other parts. Visit the Parts Category for more information.

The output SSI2131 Prototyping Board for all three wave forms, saw, triangle and pulse, is 0 - 2.5V. In order to use this output on a Eurorack setup you're going to want to scale to 10V peak to peak.

This can easily be accomplished by using the external +5V ouput of the SSI2131 Prototyping Board, pin 32, a TL074 and some 10k, 20k resistors in a non-inverting configuration. Essentially you want to amplify the signal to +10V and offset it in a negative direction by -5V.

Looking at the saw output in the picture below as an example:

The +5V going into the inverting input provides the -5V offset we need to complete the scaled output.

The diagram below is what I will be using in an upcoming Eurorack VCO that uses the SSIS Prototyping Board as its core.

The PCB Map has been updated to include all PCBs for the Erica Synths DIY VCO. Check it out!

The PCB Map now includes maps for the Erica Synths Swamp PCBs. More Erica Synth modules to be added in the future.

The Erica Synths Bassline DIY module is a rather complicated beast, with the main PCB weighing in at around 200 components. This results in a rather dense layout. Even with the PDF showing component placement that is supplied with the DIY files, it can be challenge to find the location for individual components.

To assist in building the Bassline module, Infinite Machinery has developed the PCB Map, an interactive guide for mapping components and for assisting in populating the PCB. This app is available to anyone building this module, not just customers of Infinite Machinery.

The PCB Map works by showing a BOM in a left side navigation panel for the PCBs that make up the Bassline. In the right hand side is a high resolution picture of the PCB being worked on. Selecting a component in the navagiation panel will locate the part on the PCB image by drawing a rectangle around the part's position. The image of the PCB can be zoomed in and out as well as panned using a mouse or touch. Another nice feature of the PCB Map is the ability to filter components using any of the columns. For example filter all the 0.1uf capacitors. After defining a filter, click the Map All button in the header of the component grid and all the filtered components will be mapped at once. This can be very handy when installing multiple components of the same value. 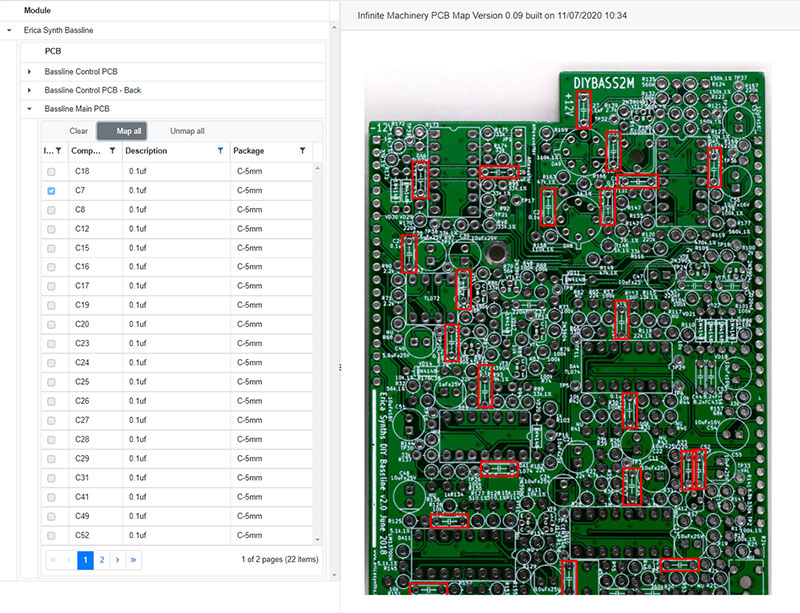 Calibrating the scale of the SSI2131 VCO is a rather simple process, but it does involve a bit of math. We've made an online calculator that you can use to tune the scale of you SSI2131 VCO. Using it is easy - Enter in the frequency values for 1V and 5V inputs and the calculator will show the target frequency to tune to. More detailed instructions are on the page and the SSI2131 datasheet has all the information about the turning process.

Here are some tips and suggestions for building the Kassutronics VCO 3340. This is in addition to the build instructions provided by Kassutronics.

The MMBF4117 should be the first component you solder to the PCB. Althought an SMD component, this component is rather easy to solder for the experienced builder. My technique is to put a small amount of solder on one of the three pads then tack the component in place using one leg, making sure the other legs are positioned property over their pads. Then solder the other two legs in place.

Note that the MMBF4117 uses two 4.7K resistors in its supporting circuit, rather than the 1K. This modification is described in the build instructions.

The Alpha potentiometers need to have their anti-turn tabs removed. This can done using a sharp pair of side cutters.

Test power before inserting the ICs

The panel for the Kassutronics VCO 3340 is made of high quality birch plywood. It has a protective film on both sides of the panel, which will need to be removed before attaching it to the module.